Minecraft is a proven product. Fledgeling is a distant dream. Somewhere between Fledgeling and Minecraft, Uplift juts, jaggedly jousting juxtaposition.

How much can be accomplished in a breath? A day? A lifetime? What can be done with a grain of sand, a brick, or a mountain? What is it like to be a tuft of grass, a bug, a crystal, or an avalanche? Could intelligent rabbits build a civilization? All these questions and more, I intend to explore in Uplift.

If none of that interests you, you should probably stop here. But if it intrigues you, please read on.

Have you ever wanted to try making a tree? There are lots of difficult decisions! Whether to go for height, or breadth (or both?). How much water to use, and how much to save for later. What kind of seeds and dispersion method to employ. Whether to grow fast to a short height, or slowly to a great height. Should you use thorns and poison to protect yourself, or welcome wildlife along with the fertilizer and seed dispersal that they afford?

How about building a mountain range? It’s not as easy as it looks. You might want strong rocks at the base (so it doesn’t topple) and soft rock on top (to provide topsoil). But soft rock is easily eroded, and all the good minerals and gems are in the hard rocks in the base. Plus building a mountain range takes a long time, and as you move stuff around it’s going to disturb the ecosystem on the surface, cause earthquakes and landslides, and no end of headaches for miners.

Maybe you’ve wanted to grow a gemstone deep in the magma filled crevices of the earth. Or direct an avalanche as it thunders down a jagged slope. Maybe you’d prefer to play with mushrooms, decomposing leaves in the shade of mighty trees. 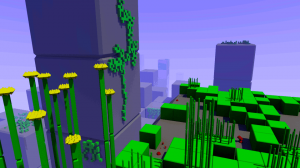 Giant boulders and some moss… I’ll keep working on the pre-vis. This is just a taste.

Uplift is about plants, bugs, animals, mushrooms, crystals, disasters and mountains. It’s also about how all of those things interact with one another to shape the landscape and ecosystem.

As a way of exploring what we’re going for, let’s break down the description.

Procedural: Everything in Uplift will be geared toward user-guided procedural generation. Minecraft uses procedural techniques to make the environment, but not the inhabitants, and the user is stuck interacting one voxel at a time. Uplift is designed around making procedural tools ubiquitous, and putting them in the hands of the user.

Living: Uplift is built around every element being active. Instead of sitting statically, every voxel in Uplift will grow, erode, live, and die, either at the user’s direction, or automatically. Uplift is designed to be active in every respect.

Epic: In the sense of long duration and the poetic rhythm, Uplift is intentionally epic by design. Accompanying the four spatial scales above, Uplift is set in four time scales. The first is the instant (around 1/10 of a millisecond). This is for things that happen really fast, explosions and collisions and fracture propagation. The second is the breath. It’s about two seconds, it is the measure of the motion of animals and people. The third is the day. It’s the amount of time it takes to sprout a mushroom, or grow a blade of grass. The fourth is the era (around 100 years). This is the measure of mountains and seas. Combined with the procedural tools above, the user will be able to interact meaningfully with all three of these time scales in the course of a few minutes of play. Grind is the opposite of epic, unless it’s directing your glaciers to grind mountains into chalky schist.

Toybox: The player is not a character in Uplift, but instead reaches into the microcosm to direct its course.There are no hard and fast win or loose states. There is no score (though there will be metrics). You can make a game out of it if you like, by setting your own goals. But fundamentally, Uplift is not trying to be a sport, or a competition. It’s just something interesting and intricate to play with. In this sense Uplift is a toy.

But Uplift is also a toybox in that you can choose what parts to play with. Want to play in a world with just rocks and animals? Fine… though the animals had better be lithovores! Prefer playing in a world made exclusively of soil and plants? Or detritus and fungus? That’s fine too. All of the elements of Uplift are designed to work in any combination. A few of them will even stand on their own.

So, there you go! An introduction to Uplift! Next I’ll go into detail about the various systems and how they interact.