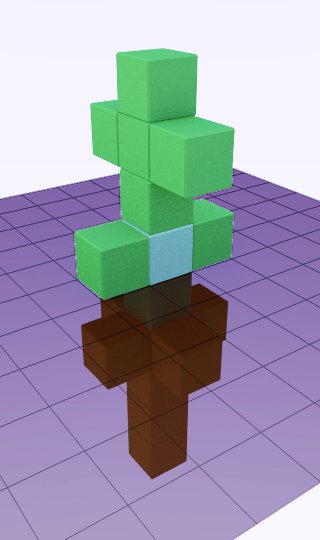 Terestrial plants grow from seeds. A seed is a concentrated bit of building materials, energy, and instructions that is missing one thing… water. In fact, water is the critical component which allows seeds to flourish. There are also factors such as temperature, air, and light.

In keeping with the simplified nature of Uplift, this process is simplified as well. A plant has three primary resources it keeps track of (alongside the structural and thermal ones that are inherent to all blocks in Uplift): Nutrients, Energy, and Water. In addition, there are three primary structural components: Leaves, Stem, and Roots.

Of course, it’s not very efficient to build stems that don’t do anything. What if the leaves and roots were to take on some of the properties of the stem? Why, then you’d have something like grass.

A single blade of Uplift grass

But with combined functions, each block will not operate as well. In real life, bushes grow larger than grass, and trees grow taller than bamboo. So too in Uplift. The transmission capability of general purpose blocks is less than that of specialized ones. Note how the plant in the first example has 11 leaf blocks, and room for plenty more, while the grass has only 8.

And after all, number of leaves is not really so important as where those leaves are. Uplift will have an ambient occlusion system to calculate the received daily light. Leaves lower to the ground are obstructed by leaves further up.

This means that plant growth strategy needs to take into account not only the immediate realities of a single plant in isolation, but the competition between each individual of a species, and competition with other species of plants. Quick growing plants will be unable to reach great heights (and thus, ultimately, unable to dominate a mature ecosystem), but will spread rapidly to grow in newly available areas (landslide scarf, flood plains, pyroclastic zones). 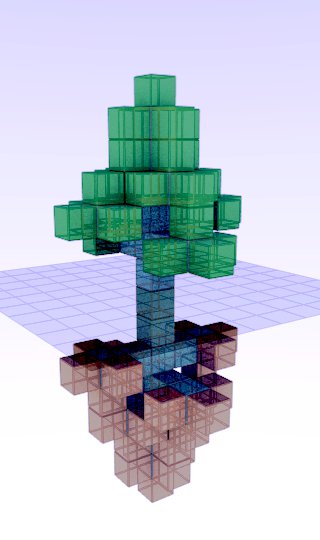 The Uplift plant generation system seems to be shaping up nicely. There is a decent spread of short to long term resources and strategies already, all with just a few kinds of plant matter. Though, with such a few systems, a kind of trivial symmetry seems to emerge. We’ll see what we can do about that with disease and environmental influences. But, in the ideal world of an isolated plant, an ideal form will no doubt arise.

But what about specialized systems, such as thorns, flowers, fruit, and so forth? As it turns out, these are all interfaces between plants and creatures (animals, insects, birds) and not fundamentally part of how plants function in isolation. But speaking of isolation, plants have quite a few systems supporting their existence. Let’s explore how each of these might affect (or be affected by) terrestrial plants.

Despite the marked similarity, aquatic and terrestrial plants generally have little interaction. The main area I forsee is where water is shallow and slow, such as in bogs, and marshes that support both lily pads and reeds. Otherwise, kelp and sea weeds (which don’t invest in structure) vastly out-compete terrestrial plants.

Seasons and temperature have a huge effect on plant growth. The yearly cycle, as well as weekly and daily variations, are the context in which plants grow. However, plants have an effect on weather as well. Not individually, but in large enough groups, plants retain and transpire water, as well as moderate temperatures. This, in turn, has an effect on the kinds and number of plants that can grow.

Stone can be broken apart by plants, and provides nutrients for their growth.

Plants need air to live. I guess that means “air” is a fourth resource, but it’s common enough that I didn’t think to include it. Hmm, that bears some pondering.

As noted above, plants require water to live and grow. In addition, plants retain water and transpire it back into the atmosphere, reducing runoff and erosion, and increasing atmospheric moisture levels.

Plants and lava don’t get along well. However, ash is a good source of nutrients for plants, as water can leach out the minerals from the large surface area. So, indirectly, plants benefit from volcanos and lava. Just don’t get them too close together.

Plants can only live in a pretty narrow temperature range. As noted above in weather, plants tend to drive temperatures toward a “habitable” range, as they absorb light and retain heat in cold conditions, while dumping water to lower temperatures in hot conditions.